The Church of Saint Peter 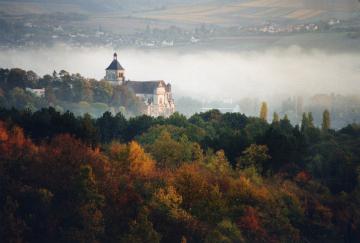 aint Peter’s church was originally an annex of Church of Saint Aignan of Tonnerre castle ; it became a separate parish in 1164. The church was home to a chapter of 18 canons up to the time of French Revolution.
The old church was destroyed around 1288 during the building of new fortifications. All that remains is a 12th century Romanesque portal in the western wall, which was concealed in the 19th century by a housing for the bellows of the organ, and two closed-up windows, which can be seen on the outside of the church.
A new church was built in the 13th century in Gothic style, but it was destroyed in the great fire that struck the city of Tonnerre on July 8th, 1556. Of that church, all that remains are parts of the choir and the side sacristies. St Peter’s had to be completely rebuilt from the end of the 16th to the beginning of the 17th century.
The great western tower, which was raised at the end of the 15th century, survived the fire. The church bells are located there. Its dominating position (229.80m above sea level) made it a good site to house a watchman for the city.
The south façade of St Peter’s was built and then modified between 1586 and 1630. It shows the shift to the Italian Renaissance style that had become popular in France.